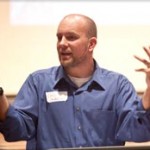 Growing up in Fairmont, Minn., Pastor Eric graduated from Bethel College and, after working at Camp Shamineau for a year, served for seven years as Associate Pastor of Youth at Lincoln Evangelical Free Church in Cushing, Minn. While there, he was called and affirmed to be the first pastor of Lifespring Church, in 2009.

Eric continued to serve at Lincoln while being trained for further pastoral work in theology, shepherding and preaching through The Transforming Ministries Program. It was through this and other wonderful Christian brothers and preachers — especially John Piper,  CJ Mahaney, John MacArthur, RC Sproul, Michael Horton and Steve Lawson — that Eric became humbled and gripped by the glorious convictions of God’s Sovereignty and the Supremacy of Christ in all things…and the sufficiency of the Bible to reform all of life and ministry.

Eric enjoys reading (especially history and biographies), broomball, running and hanging out with people.He can be found most days working on sermons or meeting with people at one of several local eating establishments (North Country Cafe being his most frequented!).

Eric is married to Miriam and they have Nine children: Jordan, Taylor, Gracie, Ethan, Christian, Simeon, Jubilee, Paisley and Max

Gregg has served as an elder at Lifespring Church since 2014. Originally from the Twin Cities, he is a graduate of Bethel Seminary(MDiv) and works at Cedarbrook Lumber in Aitkin, MN. He enjoys reading, listening to music and sports(Twins/Vikings).  His recommended books are reading “Knowing God” by J.I. Packer, and then reading “Knowing God” by J.I. Packer again. Also recommended are “Holiness” by J.C. Ryle, “Heaven” by Randy Alcorn, “Systematic Theology” by Wayne Grudem and “Extravagant Grace” by Barbara Duguid. 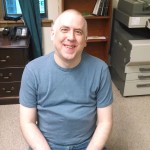 Our mission: To magnify the supremacy and sufficiency of Jesus Christ in order to present everyone complete in Him.